We Have To Go Back- The LOST Concert 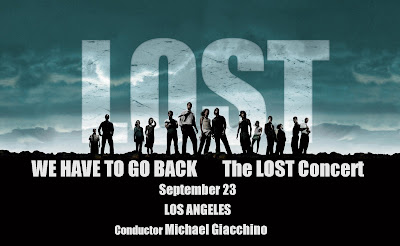 Your LOST fix is on the way!

The long awaited news on ticket sales is in. NOTHING brings me more joy than to be able to share this LOST news with LOSTies all around the globe. I am so happy that this concert is happening! It is no secret that I will forever live and breathe all things LOST. I really need to go back!

LOST fans across the known universe cheered with deafening joy when news of the long awaited LOST concert will be held in Los Angeles later this year. Resident "Island" composer Michael Giacchino announced his destiny via twitter yesterday. Concert details are still to come.

This news is totally LOSTastic to all LOST fans, which, much like me, still need a constant LOST fix.

I will forever live and breathe all things LOST. 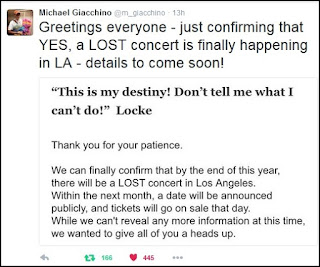 The Take2 Guide to Lost is HERE!

The Take2 Guide to Lost - The Ultimate Compendium!

LOST is alive and well!  As a contributing author, I'm excited to announce the release of The Take2 Guide to Lost- The Ultimate Compendium!  Longtime "Island" residents and new recruits alike will love and appreciate all that this extensive guide offers you.  This super-size guide gives readers and viewers insight on every LOST episode, themes, characters and so much more.  You will want to keep this definitive resource handy while living or reliving the LOST experience.

A handful of my Lost episode notes from Karen's LOST Notebook have been included in this eBook.   And again, I am humbled and honored to be a part of this awesome publication, and to be included on this list of very passionate and respected Lost bloggers and authors.

The Take2 Guide to Lost is available at all the major eBook sellers.  More than 50 contributors, comprising established reviewers, academics, award-winning sci-fi authors, and lay writers, ask and answer all your questions in this ultimate eBook compendium  on one of the most successful TV shows ever.

I'm also thrilled to make a very special offer to my family, friends, followers and all readers with a 20% discount on your purchase of The Take2 Guide to Lost.

This ultimate compendium to Lost has over 50 contributors!

I am humbled and honored to be a part of this awesome publication, and to be included on a list of very passionate and respected Lost bloggers and authors.  A handful of my Lost episode notes from Karen's LOST Notebook have been included in this eBook.

This very special extensive guide will be a great addition to your library and a great book to incorporate into your very own Lost book club!

This guide is so huge the preview is 400 pages!!  Download the sample of this guide.

Introducing the Take2 Guide to Lost … everything that was Lost and now found.

Over 50 contributors ask and answer all your questions in this ultimate eBook compendium.

Each Chapter and Guide is made up of multiple associated articles from established reviewers and academics, award-winning sci-fi authors and lay writers who became catalysts for an incredible community of like Lost-lovers.

The ’Ending’ Chapter alone has over 30 articles, opinions and insights to further tantalize your perspective.

The Episode Guide is a definitive resource of over 350 articles with at least two reviews of each episode, one being an immediate reaction and one coming from a contextual perspective … as well as synopses, tidbits and a comprehensive archive of intertextual references within each episode.

Other Chapters include;
- Cast and Characters which gives an incite to the characters role in the overall drama … as well provide juicy titbits about the actors careers;
- Mythology,' which includes posts on the Smoke Monster, DHARMA, the Frozen Donkey Wheel, and how religion was reflected on the series;
- Philosophy, ranging from scholarly but accessible posts on the philosophy and philosophers referenced in the show, to a post on how the series affected one writer's personal philosophy;
- Structure, including discussions on the flashback/forward/sideways, the DHARMA stations, and a physicist's explanation of the science of time travel;
- Interviews with the showrunners and writers throughout the lifetime of the series.

and much much more.

Take 2 Guide to Lost - The Ultimate Compendium - goes on sale on September 18, 2015. It will be on-sale at Amazon, iBookstore, Google Books, Kobo, Nook and at our own dedicated book store.

The sample download is over 400 pages. It contains the full first Chapter, a sample of the Cast and Character Guide, the Introduction and the Index for all the other Chapters … and the complete Season 1 of the Episode Guide.

It can be downloaded from

Its books are made up of already-published articles, whether they are found on-line, or from books, magazines and newspapers, paying particular attention to the wonderful writings, their authors and sites, that at the moment are not getting anywhere near the attention they deserve.

All Take2 books must maintain a traditional linear narrative in form, not necessarily of time and place, but of ideas and opinion and be imbued with one overriding primary directive … to add substance to the discourse on the subject.

It is not just a dedicated publisher of books as ‘bits and bytes’, but is also one of the world’s first virtual publishers. Although centered in New York, Take2 Publishing employs editors, copy editors, researchers and more in cities all over the world, including New York, London, Melbourne, Tel-Aviv, Kiev, St Louis, San Diego, Los Angeles … and many more.

All Take2 books are published in all recognized digital formats and are available at all key eBook retail sites including Amazon, Google Books, Kobo, Nook Press and Apple’s iBookstore.

Take2 Publishing also maintains its own online retail store for direct purchases in all formats.

HAPPY ANNIVERSARY!
Here we are, celebrating the 10th Anniversary of LOST!
It has been very emotional to reminisce about our time spent with LOST. It was a very special time for all of us. I believe it goes without saying... I really miss LOST.

For all of you that are missing ‪‎LOST‬ and our ODI LOST Podcast, here is part one to our 10 year LOST Reunion Podcast.

Part one features Anil and Karen from The ODI LOST Podcast, CJ from STV Podcast, JoOpinionated from Cancer Gets Lost, and a quick chat with the owner of Spoiler TV and DarkUFO, Andy (DarkUFO).

Spoiler TV: ONCE Upon A Time Finale Podcast... and Zombies!

I had the pleasure of being asked by the awesome guys over at Spoiler TV (@SpoilerTV)  to sit in with them and discuss the ONCE Upon A Time season finale.  It was great to chat about the finale and tons of fun for me to jump once again into the podcast universe with my dear friends Anil (one of my two partners) of The ODI LOST Podcast (@TheODI) and CJ (@cjsonic) of Spoiler TV.

Not only did we discuss the magical ONCE Upon A Time finale, but we also dove into a debate about surviving a Zombie Apocalypse.  Good fun!  Plus Anil and I mention our plans to rejoin with our The ODI LOST Podcast partner, Danny, to give LOST fans a very special 10 year reunion podcast.

Here is the link for you to listen to this podcast: STV Podcast 73 - "What would you do in a zombie Apocalypse discussion, Once upon a time and more"

I can't thank the guys enough for the opportunity to hang out with them and discuss a couple of great TV shows.