Script Consultation with the Creator of ABC’s Once Upon a Time, Edward Kitsis 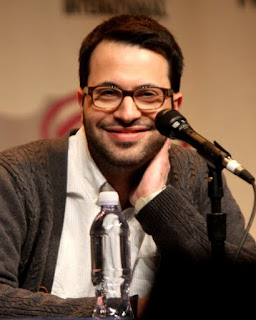 ATTENTION LOST fans, ONCE Upon A Time fans, TRON fans and script writers everywhere- This is a super awesome way donate to the Pitt Hopkins Research Foundation and get expert feedback from Eddy Kitsis!
Bid on a Script Consultation with Edward Kitsis!

Bet you didn't know that I'm a huge fan of The Walking Dead on AMC. I enjoy this zombie tale for more than just the zombies and the realistic zombie kills- this fantastic, intense and moving story shows us the struggles and challenges of the survivors. It's a pretty deep character driven story- and I love that! While some complained about season 2 being more about "the people" on the farm than the zombies, I reveled in the down and dirty nitty-gritty truth, fear, courage, morals and flaws of the survivors.

Following every episode of The Walking Dead there is a fun and insightful live after-show hosted by Chris Hardwick (@nerdist, G-4) called Talking Dead.  Chris discusses each episode with awesome special guests, writers, producers, cast and crew of The Walking Dead. It's a really good time.

Here's the bonus footage from that episode. Chris brings some LOSTness to the interview- which is always a LOSTastic bonus for me.

The Walking Dead and Talking Dead returns to AMC on Sunday February 10th, 2013... And yes, folks, we'll all still be here. The world isn't going to end just because the Mayan's forgot to buy a new calendar. But be ready for zombies!