It's about time I post a bit about Zero Hour, a new show that premieres Thursday, February 14th at 8|7c on ABC.

You know how much I love a great mystery and how I get excited at the thought of solving puzzles, learning and uncovering the truth and Zero Hour seems to cover those bases.  But in all honesty, it's when they posted a few classic Modern Skeptic magazine covers that really perked me up.  The covers hint to a few familiar myths, things not being what one may assume and that there's more (or less) going on than meets the eye; things that require further investigation and have yet to be explained. The covers incorporate various unique ABC TV shows as the topic of interest, which is very clever and cool, but one cover they included connects us to our beloved LOST and the "Island" - a show that's been off the air since May 23, 2010.  And of course I totally love the fantastic ONCE Upon A Time cover and the questioning of portals. Both LOST and ONCE Upon A Time involve, time, different realities/other worlds, portals and share many more connections.

IMDB lists Ken Leung (LOST's Miles Straume) in a starring role, but he doesn't show up on ABC's cast list from what I've seen.

Needless to say I will give Zero Hour some time and see where it leads.

The premise of Zero Hour:
As the publisher of Modern Skeptic magazine, Hank spent his career following clues, debunking myths and solving conspiracies. But when his beautiful young wife is abducted from her store, an antique clock shop, Hank gets pulled into one of the most compelling mysteries of human history, stretching around the world and back centuries. To find his wife, Hank will have to unravel one of the greatest conspiracies of all time. Contained in one of his wife’s clocks is a treasure map, and what it leads to could be cataclysmic.  Hank will race against the clock, to find his wife and save humanity.


Looking back at a classic cover of Modern Skeptic magazine! 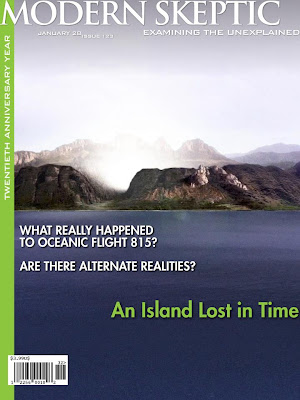 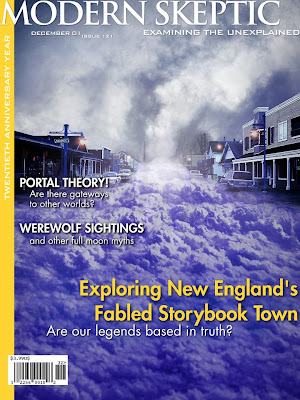 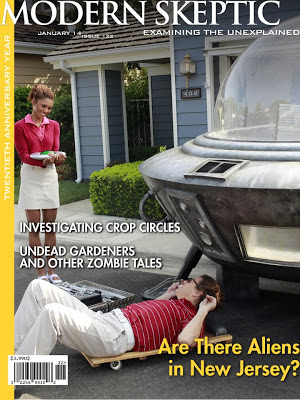 Here's a look at Zero Hour

An Important Announcement from LOST University 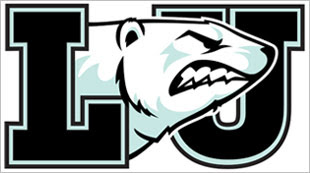 On January 14th, 2013, I, as well as all students and alumni from the prestigious LOST University received a very sad letter from the Board of Regents. I never thought we'd receive such a letter, but alas here it is.

I had high hopes to one day return to LU and further my education and finally graduate with a PhD; a Doctorate in LOST Studies. I plan to continue my LOST studies and I even dream of partaking in extensive yet adventurous field research, but the how, where's and when have yet to be determined.

I wish my fellow Polar Bears continued success, and I hope our paths cross again as we go through this thing called life. Although LU is closing its doors, it's our constant love of all things LOST and our passion and commitment to having LOST be a part of our lives that remains and keeps us going and growing.

I am positive we'll still have our many LU reunions to enjoy, and of course, the lifelong friendships we have made make life infinitely sweeter.

This isn't really an end... it is a new beginning and a chance for us to discover new ways to continue our LOST education.

LU, you will always be in my heart.

Here is the official Email:

We have traveled through time together taking us to the end of your experience at LOST University. Due to budgetary restrictions, the cost of living and other variables, the Board of Regents has regretfully had to shut the doors on this prestigious academic institution on January 31, 2013. While LOST University will cease to exist as a physical institution, we strongly encourage you to continue on your journey of knowledge and human understanding. Whatever happened during your time here happened, and we hope that the memories we created together will live forever in your hearts and beyond.

The LOST University Board of Regents 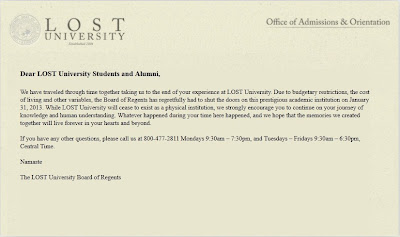 Thanks to the clever people over at CollegeHumor, this week there was a spark of excitement for the LOST community.

CollegeHumor Video created this fun look at LOST through this old school RPG. Watch the video game's player and characters navigate the game play through LOST environments, memorable scenes and all with our beloved characters. Michael Giacchino's soundtrack is represented in a fun and classic video game way too.
Lostie's wish this was a real game!