LOST made an appearance at this year's San Diego Comic Con!

Totally LOST; LOST One Year Later, a panel hosted by Entertainment Weekly, Jeff "Doc" Jensen and Dan Snierson filled a room with LOST fans voracious to stay connected to LOST.  I was happy to know fellow LOST friends of mine where in that room experiencing the LOSTness first hand and I look forward to seeing the many photos that were taken there.

Damon Lindelof and Carlton Cuse made an appearance. Their entrance into the fan filled room was fun and a surprise, as Damon entered wearing a Dharma jumpsuit and a Boba Fett helmet, and Carlton's Comic Con costume was of a Storm Trooper.  I got a kick out of them injecting some Star Wars into the fun.
Damon and Carlton took questions from the inquisitive audience.  One question that was asked, "Why couldn't Widmore and Ben kill each other?"
Darlton's reply: "Because they believed that they couldn't."
There is that wonderful insight to the "Island" adventure..."believing"

Michael Giacchino was in the audience along side of the obsessed LOST fans. Damn, I wish I was there to take in all of the LOSTness!

I  hope LOST makes an appearance every year at Comic Con.  They must know by now that we dedicated and faithful fans aren't going anywhere.

Of course I wasn't there, but that didn't hold back my obvious excitement with getting new stuff from the brilliant minds over at team LOST.  Oh how we miss you SO!

A few days ago those of us over at twitter witnessed a little "feud"  between Damon and Carlton about "opening a vault".  It seems that this is what that staged argument was about...
This brand new LOST secrets clip comes straight from Comic-Con 2011!
By the way...Although this video is created to give us a good giggle and a much needed LOST fix, there is indeed cryptic information you really need to pay attention to.  Actually it's not even cryptic, it outright states some pretty cool and important stuff.   "Metaphor"...Hmmm, let's see...where have I heard that before?

Until next year...
Enjoy!

Love to all who are "LOST"™

In this edition of the LOST podcast we discuss my favorite character, John Locke.  We chat about his early days and his evolution as a character, his communion with the "Island", his connection to the Smoke Monster and his awesome legacy.  We could have gone on much longer than we did, as there is so much to say about this multi faceted character. 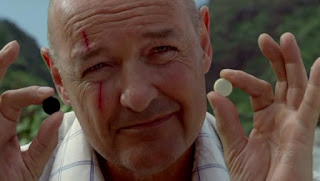 Thanks for all the great feedback for the last podcast and we will hopefully do another one in a few weeks!
Enjoy!
NOTE: The podcast can be found on iTunes or you can simply use the audio player below or the download link below the player.

PS: Here is the video of Kevin Pollak's interview with Damon Lindelof!

Kevin Pollak's Chat Show: Guest Damon Lindelof
Pay close attention to Damon's comment starting around the 28 minute mark (or so), when Damon discusses a bit more about his geek rift with George RR Martin. But watch the whole interview because it really is time well spent with these two men.