Some great LOST insight was sent my way and I was asked to pass it along to you.  It is an honor to do it!!

Fellow Lostie Jooky22 was at the LOST Auction and was the winner of Lot #660 which contained Ben's Island Messenger Bag, journals and the photos of Ben (that Miles had when we first met him.

The bag is as awesome, but what really got Jooky22 was Ben's journal.
We saw Ben writing in this journal before being interrupted by a walkie-talkie call in the episode Through the Looking Glass.
Here is a note from Jooky22:
"There are screencaps of the two visible pages on Lostpedia but they're not quite correct. More importantly, there are four "other" pages that Michael Emerson wrote, and they are far more interesting. Death notes, supply discussions and an ominous reference and drawing of something called a "Deep Dark Sink".  On the commentary for the episode you can hear them talking about the journal and Michael talks about writing stuff in there that had to be vetted by the producers to make sure it fit the narrative. Awesome stuff!"

Thank you SO very much Jooky22 and Brooke for sharing the very first look at this wonderful LOSTNESS!! 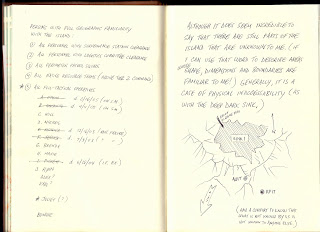 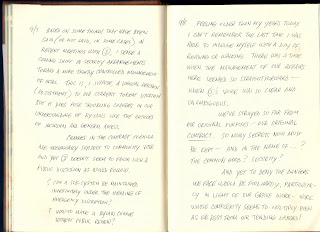 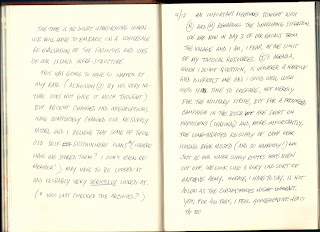 Labels: Diary, journal, The Man Behind The Curtain

Flashing Back to All the Best Cowboys...,Whatever the Case...,Hearts and Minds 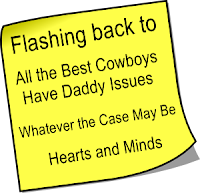 Hi Losties!It is important for you to have access to my original detailed notes for each of the episodes. These episodes contain some very important things that set a thread for all the other episodes.
Click here for detailed notes on
All the Best Cowboys Have Daddy Issues
Whatever the Case May Be
Hearts and Minds


When I first shared my notes with LOST fans years ago I was always careful to present the episode and its potential clues in a very neutral way, always including the many ways one could look at a clue and never outright told anyone what to think or which way to lean. I also was cautious not to publically go too deep into certain ideas I personally entertained. Well with this re-watch I find I am much more comfortable to voice my opinion on the story and its clues and with no holds barred, confidently reinforcing some of the important layers and their clues.

An important point I have never ignored is that Jack and the Castaways are in an unreal world. {Unreal world as opposed to a real world.}  One definition of "reality" is something that truly exists is real.
Jack, John and the Castaways are experiencing things that resemble an authentic environment even if it's via the sleeping/conscious mind. Therefore these experiences are real to Jack, John and the Castaways, as this is the way they perceive it.
For me there is no doubt their adventurous journey to enlightenment is happening in conjunction with drugs, lucid dreaming, and the possible added element of computers and/or machines.  In other words, an altered state of consciousness.

One of the layers of the LOST story is about the Castaways being trapped by their emotional past and their needing to come to terms with moving forward from it.   It is important to know anything that the mind creates is a "trap".  Unless you stop blaming others, including yourself, for the state you are in, you are not awake.


A few important things I wanted to add to my original note for All the Best Cowboys Have Daddy Issues are:
✈ We know Jack is stubborn and definitely angry, and although we tend to see Jack motivated and in control on the "Island" and with his friends, he really is always on the verge of snapping.

✈ In this episode Jack's "Island" adventure has him trying to find Claire and Charlie but in "reality" he is literally running in circles trying to find answers, his father and himself.

✈ In the hospital scruffy Jack with different color eyes, wasn't called down to do the surgery yet Christian was called away from a restaurant after having a few.  When I first saw this episode it passed my mind that it is possible that between Jack and Christian its Christian that is the lesser evil.

✈ Amping up her stress

✈ Locke follows his gut. Locke feels "it"!  With that it's time for a quick lesson on Chakras. We have hints to Chakras throughout the story.  Locke even teaches Walt to use his mind's eye to visual things.

Chakras: word that translates as "wheel" or "turning".   The Chakras are said to be "force centers" or whorls of energy permeating, from a point on the physical body

Whatever the Case May Be
Here is an excerpt from my posted notes for Whatever the Case May Be.  Be sure to head over to read about this very interesting case.
Faith comes back around. Rose is a supporter of faith. She's trying to give Charlie some hope. She's trying to help him come out of another dark place. Remember Locke helped him get out of a dark place with his heroin addiction.
What else comes back around? It's very simple...everything. Karma.
I wonder if it really is better on Rose's side.

I can't help but note and question if the "Island" residents are under some sort of therapy/treatment with this Island adventure.  After all, all these people are feeling "blue" and  need some kind of help.
It does seem like hints may be telling us computers are involved in some way.

Hearts and Minds
I love the episode Hearts and Minds.  It gives us a clear clue to drugs and altered states of consciousness playing a role in the "Island" journey.

Locke gave Boone an experience that he believes is vital to his survival on that "Island".  Boone questions the "reality" of  his "very real feeling experience".
Locke is very clear in stating “It was only as real as you made it.”

The point to this enlightening experience was for Boone to confront his feelings for Shannon and his freedom of letting her go.
Boone's experience includes the "monster" and all of its mechanical sounds.   But you must remember, there's no such thing as monsters.

Labels: All the Best Cowboys Have Daddy Issues, case, drugs, hallucination, Hearts and Minds, Rewatch, Whatever the case may be
Newer Posts Older Posts Home
Subscribe to: Posts (Atom)